In order to achieve the above objectives, the Watershed project provides support to build capacities (of landscape partners, local institutions and CSOs) to execute the advocacy and influencing efforts for sustainable WASH services, water security planning, and budget tracking, with updated information and evidence-based engagement. 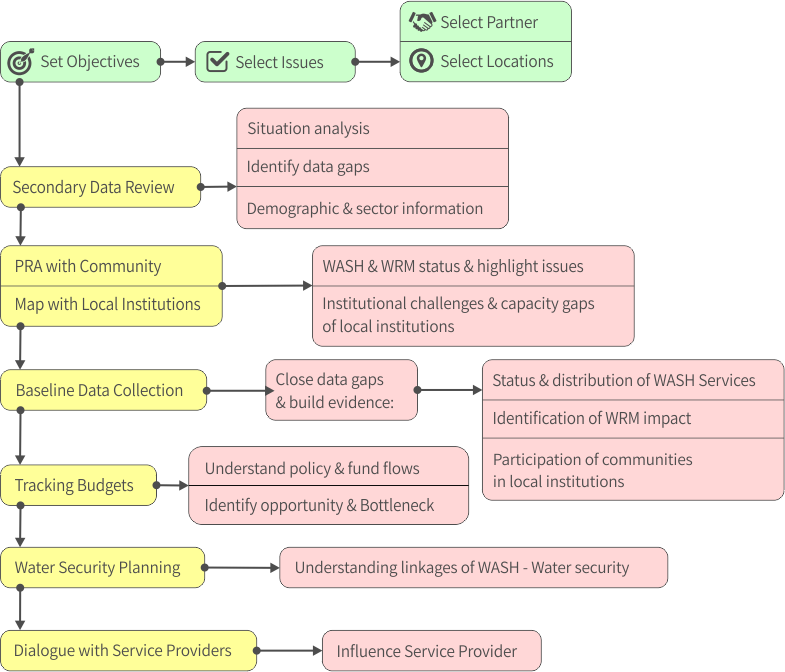 Demographic and socio-economic status of the landscape areas

As per the Census of India 2011, Ganjam district in the State of Odisha has a total rural population of 27,61,030 and urban population of 7,68,001. The district comprises of 3195 villages in 22 Blocks. Sex ratio is 50:50. The Watershed project is operational in one Chhatrapur Block, with 17 Gram Panchayats and 80 villages. Prominent social categories are Scheduled Castes (34,521) and Scheduled Tribe (502).

Although reported to have a __90%___ coverage of safe water, the state of Odisha was rated among the five poorly performing States in India for sanitation coverage until 2019. As per the 2012 baseline survey of the Ministry of Drinking Water and Sanitation, 81.5 lakh households lacked toilets in the state. Until 2018, 41% of households are reported to have toilet coverage.

As per the Census of India 2011, Samastipur has a total rural population of 4,113,769 and urban population of 147,797. The state of Bihar has performed poorly on sanitation. As per 2012 Baseline survey done by the Ministry of Drinking Water and Sanitation, 16.81 million households lacked toilets.

The Wetlands in the two landscapes

The blog on IWRM has been written by WISA talks about the role of healthy and functioning wetland ecosystems in storing water and regulating quantity as well as quality of water. It highlights the case of Tampara wetlands in Ganjam district in this blog. It reiterates the fact that water supply programmes need to be in sync with water resources management.

1. Wetlands International South Asia (WISA) is the lead partner in the Watershed India project. It is responsible for implementation, providing scientific and technical support for use and conservation of wetlands. In the consortium, WISA coordinates project implementation including direct liaison with partners and content support on water security elements.

3. Akvo Foundation leads monitoring, evaluation and learning activities for the project. Akvo introduced technology solutions in the project to capture project data and information sharing. It is also responsible for supporting landscape partners in their efforts towards process documentation and to generate reliable evidence for advocacy.

The Landscape partners are responsible for facilitating capacity building meetings for local CSOs on WASH and water security awareness and planning and village-level discussion for community to develop inclusive development plans.

1. Gram Uthhan is a non-profit organisation that works with underprivileged groups on issues such as sustainable livelihood development, promotion of microenterprise, financial inclusion, WASH, etc. In the Watershed project, Gram Uthan is the field implementation partner working in Odisha.

2. Nidan works on empowerment of the poor and marginalized groups through community services and their pro-poor participative interventions. Nidan is the implementing partner for Watershed project in Bihar.

1. Centre for Budgetary Governance and Accountability (CBGA) is an independent non-profit organisation that works on enhancing transparency and accountability in governance through rigorous analysis of policies and budgets. In the Watershed project, CBGA and IRC have facilitated workshops and supported landscape partners on budget tracking and WASH financing.

2. Arid Communities and Technologies (ACT) is a non- profit organization that aims to strengthen the livelihoods of communities in arid and semi-arid regions by resolving ecological constraints through access to technological and institutional solutions. In Watershed project, ACT facilitated workshops for local CSOs including landscape partners on developing sustainable water security plans.

In India, planning and execution of WASH and WRM is done at several levels and hierarchies. At the National level, the Ministry of Drinking Water and Sanitation, Government of India, frames the central policies, guidelines and frameworks, which are then adapted by the States. The State governments also have policies and programmes pertaining to the local needs. Funds are allocated by the Centre and the States in their annual budgets and the execution is done by the respective District, Block and local governments.

These working papers by IRC provide details about the institutional delivery of water and sanitation services Samastipur-Bihar and Ganjam-Odisha.

Context analysis summarises the key anticipated challenges to achieving national WASH targets, map out existing government programs, institutions for WASH-WRM, identify different stakeholders and their role (govt, private, CSOs) in the Watershed project. It also looked at factors that will effect the success of the project.

This briefing paper by WISA highlights the need to shift focus towards WASH service delivery in the wider context of water security and explore an  integrated approach to sustain WASH services in the long run. It highlights the case from Samastipur district, one of the Watershed India project location to capture evidence of such interlinkages within WASH and Water resources sector.

Targets for 100% coverage with piped water supply by 2022, 80% household connections

Village-Level Information on WASH-WRM of the Watershed Landscape Area

Baseline mapping survey was done to assist the community in preparing evidence for advocacy. The following were the key objectives:

Methodology and Location for Baseline Survey

The Household survey was a sample survey. Using systematic random sampling method, 364 households in Odisha and 406 households  in Bihar were surveyed. In addition to demographic profile and access to WASH services, the survey also enquired into  hygiene behaviour patterns and the family’s participation in village level institutions and government programmes.

The Water point survey was a census survey of all public waterpoints. The survey was designed to gather information about the SDG /JMP indicators and included key WASH  parameters i.e. status of WASH services and an understanding of WASH-WRM linkages. This survey was a 100 % mapping of all public drinking water sources  in the project sites.

Each surveyed water point was given a unique number based on administrative codes assigned by the Government of India to make this data comparable to existing government records, type and status of water source.  In Odisha, total 489  water points and 1011 water points in Bihar were surveyed.  Key information collected during the mapping survey included Water point access, quantity, quality, reliability and  WRM related indicators.

Who Conducted the Survey

A group of community youth and representatives from  Watershed landscape partners, conducted the surveys. Enumerators were trained on the data collection tools, field methodology and using apps, Akvo Flow and Akvo Caddisfly, for data collection and water quality testing in the field.

Key Issues Highlighted by the Survey

Data on WASH -WRM status and service delivery was analysed and presented in easy to understand color-coded charts and maps for dissemination and dialogue between community and duty-bearers . These insights supported interactions with the  community and local government representatives (Gram Panchayat-GP) members to collectively develop an understanding of their WASH-WRM situation and initiate a dialogue to specific priorities to be identified for  each village.

This case study, explains the case of Bihar, that has remained India’s poorest state between 1998 and 1999 and between 2015 and 2016. Within the layers of poverty, the Dalit and Mahadalit families remain the most deprived and vulnerable communities. It shows how the Watershed project has been building capacities of the most deprived communities and CSOs in Barbatta village to advocate for their rights for better and holistic WASH services. This case study has been developed by Akvo Foundation.

Located along the eastern coast of India, Puruna Chhatrapur village in Ganjam district of Odisha is home to about 600 fisherfolk families. This case study shows how the Watershed project has built capacities of locals, resulting in renewed WASH priorities for the village, an increase in government funds, and the repair of handpumps and broken platforms. This case study has also been developed by Akvo Foundation.