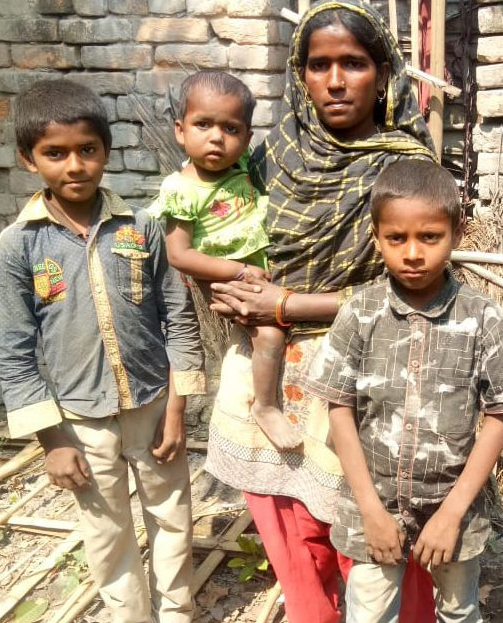 Gulnaaz Khatun will finally get her tap

Gulnaaz is a resident of Lakhnipur Maheshpatti, a village in the north-eastern Indian state of Bihar. She lives in a hut made of mud and wood, amid the agricultural lands surrounding her village. The lands form part of Debkhal Chaur, a natural wetland situated in the basin of the Burhi Gandak River, spanning 217 hectares. Gulnaaz moved there five years ago. Her husband migrated to Kolkata where he works as a washerman. His earnings are meagre and he hardly sends any money home. She is largely left to her own devices to make ends meet and take care of her four young children. The fact that she belongs to a religious minority and a backward caste makes Gulnaaz’ marginalisation complete.

Three times a day, Gulnaaz walks 700 metres to fetch water from a public hand pump. One hand pump serves about 70 people. Sometimes she has to wait in a queue to fill her ten-litre bucket. Her drudgery is compounded on days when she is sick or when the terrain becomes slippery because of rain. In the past few years, the water level has fallen, so she has to make an extra effort to pump the water. Frequently, the hand pump is out of service. Gulnaaz then has to go to other pumps, further away.

Debkhal Chaur is the primary source of water for about 1,300 farming households. A steadily increasing amount of groundwater is being used to irrigate the land, causing the groundwater level to recede. The bore wells have had to be deepened from 20 to 50 metres. Coupled with less rainfall in the region over the last two decades, large parts of the wetlands remain dry for prolonged periods.

Wetlands International participates in Watershed, a strategic partnership funded by the Dutch Ministry of Foreign Affairs. The partnership aims to improve the governance and management of water, sanitation and hygiene services (WASH) and the water resources that they draw upon. This is achieved through an inclusive approach, which pays extra attention to the participation of marginalised groups. One of the focal areas is the district where Gulnaaz lives. Local partner Nidan leads the implementation of change there.

Traditionally, India’s highly patriarchal society has restricted women from raising their problems and taking part in decision-making processes. The government has undertaken affirmative action by reserving seats for women in Panchayati Raj bodies, a form of self- government. But the underlying social and cultural inequalities persist.

When Watershed in India began in 2017, it was hard to ensure a gender-balanced approach. In Bihar, it is not common for women to speak at public plat­forms in front of men, particu­larly village elders. The Water­shed partners started working on ways of creating an enabling environment for women and marginalised communities. Watershed therefore engaged with local women’s self-help groups (SHGs) and their village organisations to be the voice for women in WASH.

Gulnaaz is a member of such a self-help group. The SHGs needed capacity development to be able to act as agents of change. Watershed informed them about WASH issues, implementation mechanisms, rights, the roles and responsibilities of women, and developmental planning processes. Gulnaaz also benefited from these interactions.

In 2016, the Bihar State government started a scheme that aimed to provide every household with piped water. This is being achieved through a decentralised approach: implementation committees at the ward level participate in decision making. In Ward 13, where Gulnaaz lives, the surveys for laying pipes started in early 2018. Gulnaaz’ house was left out during the initial surveys. The contractor, the village Panchayati Raj head and the ward committee members felt that laying down long pipes for a single household would be too expensive. Gulnaaz raised this issue in a ward-level meeting in March 2018. As she got the backing of female SHG members, who vociferously supported her, the ward members gave in to the demands, albeit somewhat reluctantly. So in the end, Gulnaaz finally will get her tap.

This story was written by Mahamuda Rahman, Communications Officer at Wetlands International and previously published in the Wetlands Annual Review 2018 magazine The Source.