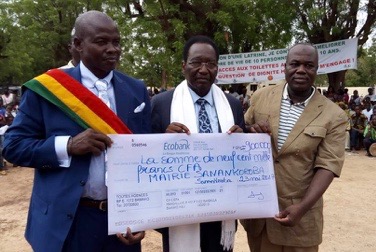 SWA Mutual Accountability Mechanism: A development driver and opportunity for the water and sanitation sector in Mali

Taking part in the High-Level Meeting (HLM) in Washington for the first time in 2014, Mali’s Government, civil society organizations (CSOs) and development partners became aware of the challenge set by the Sanitation and Water for All (SWA) global partnership.

Given this context, civil society actors seized the opportunity offered by SWA to increase pressure on the highest authorities. CSOs in Mali, including CN-CIEPA, naturally see SWA as legitimizing their efforts, revitalizing the partnership between national actors, and at last helping mobilize funds for a sector that had been receiving scarcely 2 per cent of the national budget.

CN-CIEPA/WASH’s belief in SWA is further enhanced by this being a rare occasion when the State has committed 5 per cent of its budget to the sector, and pledged to subsequently allocate 0.2 per cent of its GDP to it. This has been accompanied by a drive, initiated in 2017, to review and revise national documents to reflect the changing national and international context.

This fresh approach by national actors, compelled by Mali’s commitment to the Sustainable Development Goals (SDGs) and to the SWA Mutual Accountability Mechanism, plays a part in everything we have seen in terms of enthusiasm and various actions in support of the SDGs in Mali (awareness-raising, training, voluntary reporting, annual reviews, appeals, and involvement in SDG reviews in New York and Lisbon).

Mali has been designated an SWA ‘pioneer country’, which the Malian authorities and CSOs in the WASH (Water, Sanitation and Hygiene) sector are viewing as both an honour and a challenge. For this reason, the two national bodies – with the support of their departments and assistance from the SWA Coordinator CN-CIEPA – have been continuing this progress for some time, by committing themselves fully to the SWA Mutual Accountability Mechanism. Their close involvement in preparing the workshop to report back on the Lisbon SWA mission, and in mobilizing cooperation agencies and funders, speaks volumes about the two ministers’ personal commitment to this meeting.

Despite this encouraging progress in the attitude of the authorities (including the prime minister and sector ministers), civil society in the WASH sector intends to keep up the pressure by mobilizing the press.

Lastly, as SWA Coordinator, CN-CIEPA intends to make this partnership an instrument for real influence on the public authorities, and a framework for promoting partnership between national and international actors. Universal access to drinking water and to adequate sanitation really can be achieved; CN-CIEPA and its partners will work to ensure it.

This blog is written by Tabalaba Boureima, CN-CIEPA Coordinator and was first published on the SWA website.