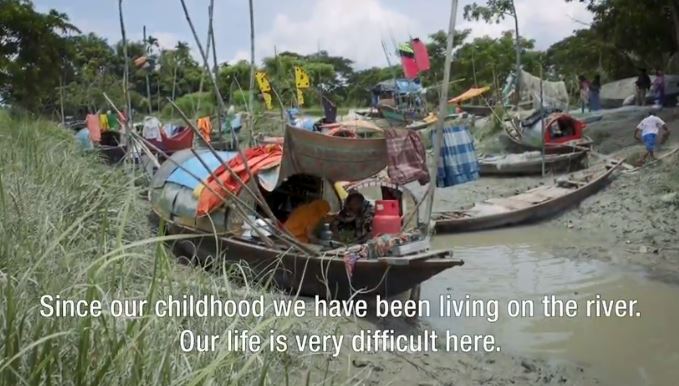 See the longer version of the video.

Situated at the heart of the Ganges delta in Bangladesh, water is everywhere in Bhola district. At the same time, water and sanitation issues are a challenge for the district’s 2 million inhabitants. Engaging people from all walks of life, civil society organisation Water Management Citizen Committee (WMCC) is building bridges between citizens and government to realise better service delivery.

With sure-footed steps Kohinoor Begum moves from her houseboat onto the quay and walks on to the nearby tube well. It takes her a couple of firm pushes, but soon enough her aluminium water pot is filled with crystal clear, cool water. Kohinoor smiles shyly: “Everyone is saying that they are drinking clean water because of me.” After a year of campaigning as a member of the Water Management Citizen Committee Kohinoor accomplished what others of her community couldn’t: she submitted a petition to the local government and finally a borehole was installed.

At first Kohinoor was hesitant to join WMCC; living on a boat her day to day life was difficult enough. Her family struggles to make a living and is often unsure of eating two meals a day. She explains: “Because we live on the water, we are unaware of a lot of things and if we are on the river with our boats we don’t have drinking water. But now I know that I can present the problems of my community to the government. That’s why I joined the WMCC.”

Over the past three years, WMCC became more active with support from the Watershed programme. Chairman Abu Tazul is clear about their ambitions: “Without participation of marginalised people, our country’s development is not possible. We want to create a united movement, engaging everyone. We want to achieve sustainability in water and sanitation.” WMCC reaches out to various marginalised communities, inviting people like Kohinoor to join their efforts. In addition, National civil society organisation DORP is supporting WMCC in realising these ambitions. Through coaching sessions on lobby, advocacy and budget tracking, members learn to share their opinions in a more structured way.

Petitions like Kohinoor’s now yield results, because the members of WMCC make sure their appeals are well prepared and backed by evidence. Through social mapping, community needs and problems are carefully reviewed and translated into solutions with a corresponding budget. This approach makes it possible to submit very targeted proposals during budget sessions of the Union Council, increasing the chances that citizen’s demands are heard and followed up.

Union Council chairman Tajul Islam is positive about the new practice: “WMCC identified the loopholes and came up with various solutions. It helped in preparing the budget for our Union. We have been able to efficiently allocate budget for WASH and since the last financial year we installed 70 deep tube wells for almost 40.000 people.” At the same time Bhola district is increasing its efforts in the areas of sanitation – 80% of the population now has access to hygienic toilets –, and protection against flooding. A vital embankment and the excavation of canals.

The members of WMCC realise that they can only accomplish these results if they keep participating in the decision making processes of Bhola district. Their latest petition calls for the inclusion of marginalised groups in government committees and requests administrative bodies to bring budgets together. It is WMCC’s next mission on the way to improved water, hygiene and sanitation services.

Watershed aims to build the capacity of civil society organisations in six countries: Kenya, Uganda, Mali, Ghana, Bangladesh, India and also at international level, for evidence-based lobbying and advocacy on Water, Sanitation and Hygiene (WASH) and Integrated Water Resource Management (IWRM) issues. This five-year partnership (2016 – 2020) contributes to the Sustainable Development Goal for universal access to water and sanitation services and water security by making the voices of citizens heard and strengthen governance and accountability.

The partnership activities will specifically focus on the identification and inclusion of the marginalised in WASH and IWRM governance.

Initially the partnership was called WASH IT!, but changed its name to Watershed – empowering citizens.